Achievements were released in Need for Speed: World on April 10th 2013. This system allows players to earn new Achievements, which are split up into four different categories.

There are 5 ranks in an achievements, with the difficulty being raised after each rank. After having earned an achievement, a driver score will be added to the driver's profile which allows players to unlock rewards. Rewards can be cars, cash, skill mods, performance parts and other parts.

The Driver Score is a system where Driver Points can be earned from the current achievements a player has obtained. The Driver Score will also be visible in the Event Lobby, the post-race screen and when comparing with other drivers. 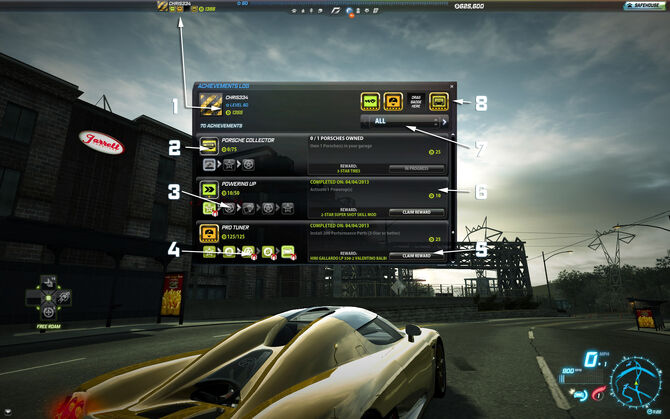 The Achievement Log is a window where players will be able to see what certain achievements has been earned, how much progress has been made for completing an achievement and claiming rewards.

There are four different achievement categories where players can win points for their Driver Score.

These achievements can be earned from races, Pursuit Outrun, Treasure Hunt and Team Escape.

These achievements can be won by customizing liveries and performance tuning.

These achievements can be won by hitting game milestones such as leveling up or earning cash.