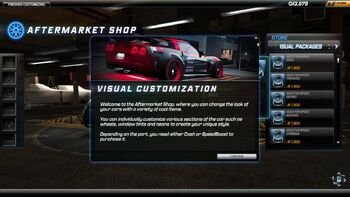 The Aftermarket Shop is a place where players can buy visual upgrades for their cars.

The Shop was released on March 15th, 2011 where it initially only contained Wheels, Neons, Window Tints, Lowering Kits and License Plates. It was expanded on May 31st, 2011 with pre-made "Visual Packages", which were split up into Bodykits, Spoilers and Hoods on the November 27th, 2012 patch.

Currently eight different categories can be applied to a Car.

A Bodykit will change the body of a car and can be bought with either SpeedBoost or IGC depending on which part and car it is. Note that Bodykits aren't available for all cars though.

A Spoiler is a visual upgrade for the rear side of the car and can be bought with either SpeedBoost or IGC depending on which part it is. Players can choose between installing standard spoilers and spoilers made out of carbon fiber.

Also a no spoiler option for 300 SpeedBoost can also be equipped on several cars and will remove the original factory-installed spoiler if a car has one pre-installed.

Hoods are visual upgrades that will change the bonnet on the front side of the car. Hoods can be either bought with SpeedBoost or IGC depending on which part is is. Players can also choose between standard hoods or hoods made from carbon fiber. Note that Hoods aren't available for all cars though.

Rims (or Wheels in-game) are the outer edge of the Wheel which holds the tire. Unlike all other Aftermarket Parts the Rim manufacturers consist of 15 licensed brands. There are several rim types being offered in a variety of sizes. Players can obtain Wheels by buying them with either SpeedBoost or IGC or by winning them in the Lucky Draw after a race has ended.

Neons (or Underglow) are lights attached to the chassis of a car so that the ground under the car becomes illuminated. Players can obtain Neons by purchasing them in the Aftermarket Shop for 1,500 SpeedBoost or by winning them in the Lucky Draw after a race or Team Escape has ended.

Some of the Special Edition cars in Need for Speed: World have exclusive neons installed which can't be obtained in the Aftermarket Shop.

Window Tints are another visual upgrade that the window colors of a car. There are several Window Tints in the game with different alternative hues, compositions and saturations. Players can obtain the Tints in the Aftermarket Shop for 400 or 800 SpeedBoost depending on which part it is. The Window Tints can also be obtained by winning them in the Lucky Draw after a race or Team Escape has ended.

Lowering Kits decrease the ride height of cars, with each Lowering Kit offering a different ride height in three reduction levels. The kits can be obtained by buying them or by winning them in the Lucky Draw after a race or Team Escape has ended.

There are several types of License Plates in the game and some of the plates are only available on Special Edition cars or in Aftermarket Card Packs. Some of the License Plates though can be obtained by either spending SpeedBoost or IGC but can also be won in the Lucky Draw after a race or Team Escape has ended.