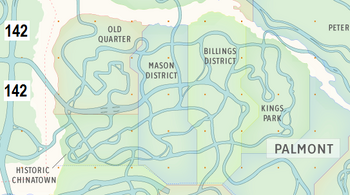 Downtown Palmont is the central borough of Palmont City. Downtown Palmont's Skyline can be seen from most areas in the game including Silverton, Fortuna, Kempton and even parts of Downtown Rockport (super-imposed textures). Most skyscrapers are in the Billings District.

Players first encounter this borough when starting the game. One race starts in Old Quarter, another in Mason District while the other two are located in Historic Chinatown.

There are 13 races in Downtown Palmont:

And one Team Escape:

1 of 11
Add photo
Retrieved from "https://nfsworld.fandom.com/wiki/Downtown_Palmont?oldid=86292"
Community content is available under CC-BY-SA unless otherwise noted.