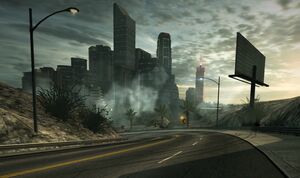 Palmont is the city that makes up the western part of Need for Speed: World's game world. Palmont City comes from the game Need for Speed: Carbon, that was released October 31st 2006. Unlike Rockport it is mostly urban, but has various styles of area.

The City is split up in four major areas;

Kempton - Based on Long Beach, and has industrial zones

Silverton - Based on Las Vegas, and has a small industrial area and high up residential area.

Palmont is best known for its great views and great landmarks. But one of the biggest attractions, the Canyons, are not actually available in World. There were new Canyons planned for the game in the future, but because of the shut down of the game, the Canyons will not be available.

On June 28th 2011 after the 28th July maintenance, a road sign that reads "Eagle Canyon" was found in Fortuna near the North Bellezza event. The sign was removed a few days before Christmas later that year.

1/31
Community content is available under CC-BY-SA unless otherwise noted.
Advertisement