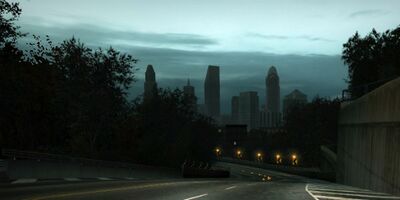 Rockport is a city that makes up the east side of the World. Rockport comes from the game Need For Speed: Most Wanted that was released November 15th 2005. Unlike Palmont, Rockport is mostly rural and industrial. It has lots of woodlands, factories and docks.

Rockport's city has an old dirty industrial look, although it does feature some modern architecture too, particularly in the Airport district. It features landmarks like Century Square, based on Times Square in New York City, and the Rockport Turnpike.

The Countryside features areas based on Harvard University, a Country club and seaside fishing towns. Masterson Harbour features a Naval Shipyard, which is a popular hangout for players looking to drive around an area with no traffic.

The city is split up in 3 boroughs:

1/24
Community content is available under CC-BY-SA unless otherwise noted.
Advertisement