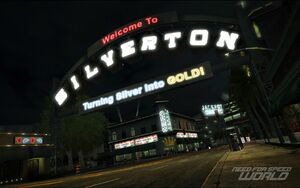 Silverton is the northern borough of Palmont City and is based on the city of Las Vegas, Nevada, USA. It is best known for its casinos, hotels and neon signs but also the luxury homes that can be found mostly in Diamond Hills. Silverton can be reached via Highway 142 or Highway 99 and is connected to Downtown Palmont by Francis Tunnel and Blackwell Bridge. There are a lot of sharp turns and shortcuts in this region.

There are seven districts in Silverton:

There are many landmarks in Silverton that help make Silverton the great attraction that it is.