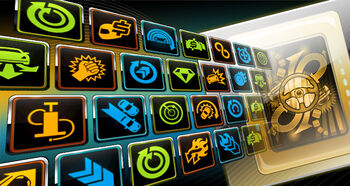 Skill Mods provide the ability to customize skills any time a player wants. They replaced Driver Skills and are similar to Performance and Aftermarket parts, which can be won from events or purchased as part of packs.

These Skill Mods can then be applied to a specific car with a maximum of five mods per car, 6 if it is a Treasure Hunter car, Juggernaut car or a Drag racing car. Quality is based on a stars rating system where parts range from 1-star to 3-star. After being exclusive to the Pagani Zonda F Roadster 'VIP' Edition, 4 Star Skill Mods were released on December 13th 2012.

With the old Driver Skill system there were a total of 24 skills. Skill Mods have a total of 30 skills, however, some skills have been removed. Among those removed are the handling, acceleration and top speed skills which increased car performance in races by 20% in each category.

How to Acquire Skill Mods

Transition From Old Skills to Mods

When the new Skill Mod feature was implemented, players received:

How to Apply Mods to a Car

Skill Mods are similar to Performance and Aftermarket parts in that once they are installed on a specific car, that car will enjoy the benefits of those mods for as long as they are applied. Once a Skill Mod is removed that car will no longer receive its effects.

Skill Mods are applied in the Skill Workshop.

Note: Treasure Hunter or Heavy Mass and Aero Drag have their own separate slots so players can still add a maximum of five mods to the car.