This page needs to be cleaned up. Please help us fix this page by converting this page into 3rd person. 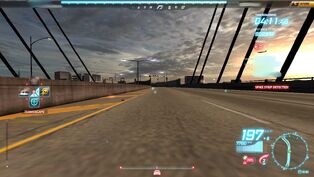 Team Escape is a gamemode that was released on 29th March 2011.

Team Escape is a 2 or 4 player sprint event with police vehicles in it. Players need to get from point A to point B without getting busted. If anyone from the team of players gets busted, all of the players in the team will lose a strike, and the busted one will re-spawn at the nearest teammate.

There can be 2 or 3 strikes, depending on the track. If the player or another driver(s) gets busted without any extra strikes, the player won't be able to respawn, and therefore wont be able to complete the escape. Each track has a specific time limit. If a player does not reach the finish line in time or fails to finish 30 seconds after the first player have finished, then that player is busted.

Team Escape gives finishers a lot of Cash and Rep. Players can also get extra rep and cash if nobody got busted and by using the team powerups. The more players that escape, the more rep and cash there is to win regardless who finishes first.

See Pursuit Outrun to learn the basics of how pursuits work.

In Team Escape there are obstacles that Players should be aware of such as:

This event is not a race. Rewards are the same for every player, there is nothing to gain from finishing ahead teammates. It is important to work together to make sure as many players as possible finish the event. Team powerups boost everyone on the team. It is also recommended to avoid contact with teammates, especially through corners and tight spaces. However, contact from behind can sometimes be used to free a player from a crash or pile-up. Another hazard to avoid when not far behind is pursuit breakers, because they block any teammates behind.

If a player is near the finish line and the others are very far behind, then it is recommended to wait until there are less than 30 seconds remaining before crossing the line, because once the first player crosses the finish line, the timer is cut to 30 seconds automatically. At this point, all of the remaining strikes are gone. For example:

On February 7th 2012, two new tracks were added to the existing six. The two new tracks are limited to 2 drivers, and are far shorter, but also harder. Players must be level 22 to unlock 'Underground' and level 28 to unlock 'High Stakes'. These level restrictions no longer apply. Unlike the others, these tracks are not class-restricted. Some D-class cars may struggle to make it to the finish.

They offer higher chance of winning pro parts, but less cash and rep due to less players. The higher level of difficulty means that players should have a good supply of powerups.

With this update, changes were also made to current tracks. The time limits have been decreased, making it harder for slower low level drivers to make it to the finish, especially in 'All In', where the new limit is only 4 minutes. Some cops are slightly heavier, and players sometimes get busted too easily while driving away from a road block or crash by the cop car that follows them.

To reward the higher level of difficulty, the cash and rep rewards are higher than before, this extends Team Escape's reputation as the best way to earn lots of cash and rep, especially with the new time limits (if the player makes it).

On December 13th 2012, when Race Again has been added to the Post-race flow. Due the first player crosses the finish line, the timer is cut to 30 seconds instead of 60 seconds and other players that are 1500 m behind won't be able reach the finish line due the countdown timer runs out.

There are currently only 8 tracks to escape in the world. 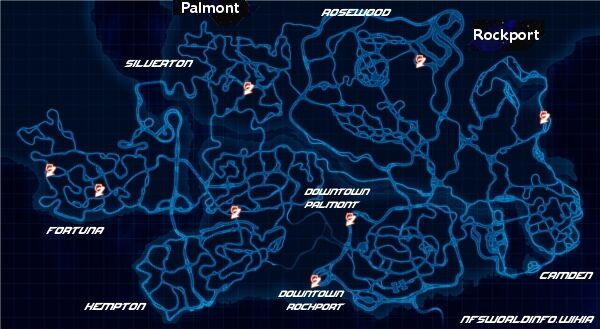 There are 2 powerups designed only for Team Escape: