Treasure Hunt is a daily event where players have to collect 15 gems around a city borough. After collecting the gems, the player is rewarded with rep, cash and a reward card similar to a lucky draw card which will give more valuable prizes as the streak develops. Performance Parts and Skill Mods are the only prizes that can be won. Also, the higher the driver's level, the higher the cash reward.

The gems' borough can be found by pressing the Map button (M). A large green circle can be seen in the borough the gems are located. A flashlight-like ray points at the nearest gem (similar to the one pointing at cops in Pursuit Outrun and Team Escape events) and each gem is also being displayed on the mini-map if the player is near any.

This mode can only be played once a day. There are different boroughs for treasure hunt so that most users won't look at the same area. The Clock resets at 0:00 GMT (Daylight savings not included).

The mode will keep track of the player's streak. The first day of the streak is called Day 1. Every day after that will give better chances of better rewards. If a player misses a day, the streak will be reset to Day 1 unless the player chooses to restore and continue the streak for 500 SpeedBoost.

This mode is currently in Version 2.0. Version 1.0 did not have reward cards. 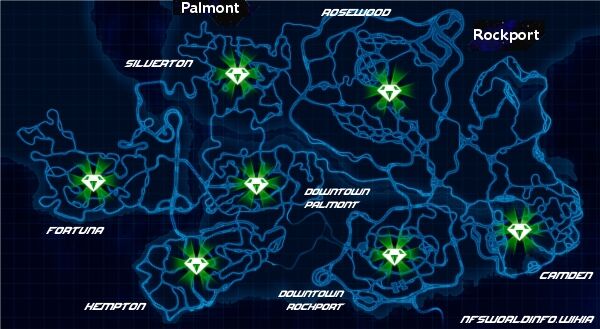